Sort by By year By author By title 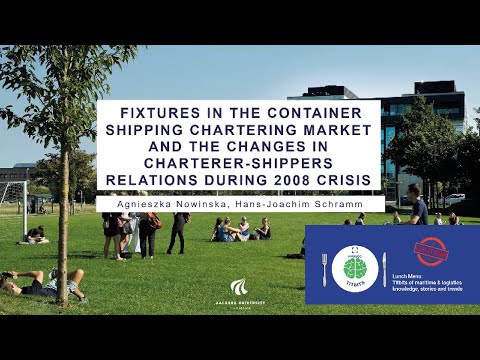 In this video, Agnieszka Nowinska (Aalborg University Business School) and Hans-Joachim Schramm (Copenhagen Business School) talk about their research on chartering during the financial crisis in container shipping. The session has been developed in collaboration with MARLOG.

A mixed integer linear programming model is presented for the operational level cargo allocation and vessel scheduling problem of a liner shipping company in Turkey, where flow-dependent port-stay lengths, transit times and transshipment synchronizations are considered. The proposed model aims to assign shipments to routes to decrease total tardiness and construct partial vessel schedules for establishing coordination with port authorities to comply with the berthing time windows. In addition to the mathematical model, novel valid inequalities and benders decomposition algorithm are implemented. Performance of the developed algorithm is evaluated on real-life problem instances. The results show that benders decomposition with valid inequalities yields the best performance.

The impacts of port infrastructure and logistics performance on economic growth: the mediating role of seaborne trade

The literature on liner shipping includes many models on containership speed optimization, fleet deployment, fleet size and mix, network design and other problem variants and combinations. Many of these models, and in fact most models at the tactical planning level, assume a fixed revenue for the ship operator and as a result they typically minimize costs. This treatment does not capture a fundamental characteristic of shipping market behavior, that ships tend to speed up in periods of high freight rates and slow down in depressed market conditions. This paper develops a simple model for a fixed route scenario which, among other things, incorporates the influence of freight rates, along with that of fuel prices and cargo inventory costs into the overall decision process. The objective to be maximized is the line’s average daily profit. Departing from convention, the model is also able to consider flexible service frequencies, to be selected from a broader set than the standard assumption of one call per week. It is shown that this may lead to better solutions and that the cost of forcing a fixed frequency can be significant. Such cost is attributed either to additional fuel cost if the fleet is forced to sail faster to accommodate a frequency that is higher than the optimal one, or to lost income if the opposite is the case. The impact of the line’s decisions on CO2 emissions is also examined and illustrative runs of the model are made on three existing services.

Having a well-designed liner shipping network is paramount to ensure competitive freight rates, adequate capacity on trade-lanes, and reasonable transportation times. The most successful algorithms for liner shipping network design make use of a two-phase approach, where they first design the routes of the vessels, and then flow the containers through the network in order to calculate how many of the customers’ demands can be satisfied, and what the imposed operational costs are. In this article, we reverse the approach by first flowing the containers through a relaxed network, and then design routes to match this flow. This gives a better initial solution than starting from scratch, and the relaxed network reflects the ideas behind a physical internet of having a distributed multi-segment intermodal transport. Next, the initial solution is improved by use of a variable neighborhood search method, where six different operators are used to modify the network. Since each iteration of the local search method involves solving a very complex multi-commodity flow problem to route the containers through the network, the flow problem is solved heuristically by use of a fast Lagrange heuristic. Although the Lagrange heuristic for flowing containers is 2–5% from the optimal solution, the solution quality is sufficiently good to guide the variable neighborhood search method in designing the network. Computational results are reported, showing that the developed heuristic is able to find improved solutions for large-scale instances from LINER-LIB, and it is the first heuristic to report results for the biggest WorldLarge instance.

Seaborne trade is the lynchpin in almost every international supply chain, and about 90% of non-bulk cargo worldwide is transported by container. In this survey we give an overview of data-driven optimization problems in liner shipping. Research in liner shipping is motivated by a need for handling still more complex decision problems, based on big data sets and going across several organizational entities. Moreover, liner shipping optimization problems are pushing the limits of optimization methods, creating a new breeding ground for advanced modelling and solution methods. Starting from liner shipping network design, we consider the problem of container routing and speed optimization. Next, we consider empty container repositioning and stowage planning as well as disruption management. In addition, the problem of bunker purchasing is considered in depth. In each section we give a clear problem description, bring an overview of the existing literature, and go in depth with a specific model that somehow is essential for the problem. We conclude the survey by giving an introduction to the public benchmark instances LINER-LIB. Finally, we discuss future challenges and give directions for further research.

Carriers in liner shipping markets frequently make public announcements of general rate increase (GRI) intentions, based on which EU authorities have concerns as to whether this harms market competition. This paper aims to empirically investigate how well the GRI system works from an industrial competition perspective, which will indirectly indicate whether carriers are able to manipulate spot rates following GRI announcements. Taking the Far East–North Europe trade between 2009 and 2013 as an example, the paper first reveals the gradual increase of GRI frequency and size, which reflects carriers’ attempts to restore profitability against overcapacity. However, out of all the GRI events only 28.6% were observed to be successful. Since these GRI successes must be the results of either price collusion (if any) and/or normal rate change by carriers in response to fundamental market developments, the effective collusion, if it exists, is actually lower than 28.6%. Next, we identify eight factors influencing GRI successes. To further assess their impact, we applied an ordered logit regression analysis, which, based on four of the factors involved, yields good predictability for GRI success. The four factors, in sequence of explanation power, are the total capacity of GRI carriers, the idling fleet size, the spot rate level, and the average ship-loading factor. Clearly the latter three factors are market fundamentals, which are unlikely to be influenced by an individual carrier in the short term. In actual fact, the conclusion reached is that there is little evidence that carriers can manipulate and distort spot rates through GRIs.

In this paper speed optimization of an existing liner shipping network is solved by adjusting the port berth times. The objective is to minimize fuel consumption while retaining the customer transit times including the transhipment times. To avoid too many changes to the time table, changes of port berth times are only accepted if they lead to savings above a threshold value. Since the fuel consumption of a vessel is a non-linear convex function of the speed, it is approximated by a piecewise linear function. The developed model is solved using exact methods in less than two minutes for large instances. Computational experiments on real-size liner shipping networks are presented showing that fuels savings in the magnitude 2–10% can be obtained. The work has been carried out in collaboration with Maersk Line and the tests instances are confirmed to be representative of real-life networks.

Major liner shipping companies offer pre- and end-haulage as part of a door-to-door service, but unfortunately pre- and end-haulage is frequently one of the major bottlenecks in efficient liner shipping due to the lack of coordination between customers. In this paper, we apply techniques from vehicle routing problems to schedule pre- and end-haulage of containers, and perform tests on data from a major liner shipping company. The paper considers several versions of the scheduling problem such as having multiple empty container depots, and having to balance the empty container depot levels. The influence of the side constraints on the overall cost is analysed. By exploring the fact that the number of possible routes in the considered case is quite limited, we show that the model can be solved within a minute by use of column enumeration. Alternative constraints and problem formulations, such as balancing empty container storage level at depots, are considered. Computational results are reported on real-life data from a major liner shipping company.

In this paper speed optimization of an existing liner shipping network is solved by adjusting the port berth times. The objective is to minimize fuel consumption while retaining the customer transit times including the transhipment times. To avoid too many changes to the time table, changes of port berth times are only accepted if they lead to savings above a threshold value. Since the fuel consumption of a vessel is a non-linear convex function of the speed, it is approximated by a piecewise linear function. The developed model is solved using exact methods in less than two minutes for large instances. Computational experiments on real-size liner shipping networks are presented showing that fuels savings in the magnitude 2–10% can be obtained. The work has been carried out in collaboration with Maersk Line and the tests instances are confirmed to be representative of real-life networks.